Get fresh music recommendations delivered to your inbox every Friday.

Hush - Berlin Club Culture in a Time of Silence 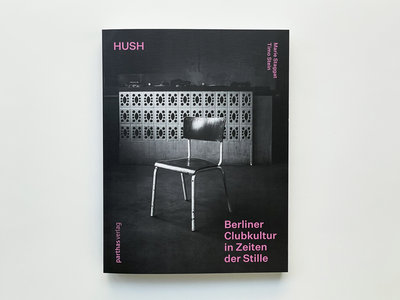 The proceeds from the sale of this book will be used to support the clubs in Berlin that were involved in the project.

They are synonymous with dancing, sweating, intimacy, freedom, and a temporary loss of control –but with the onset of the pandemic, an involuntary silence descended on what were once the city’s loudest locations.

For their book, Marie Staggat and Timo Stein visited over 40 of Berlin’s electro clubs between April and December 2020 and interviewed the oft-forgotten faces of this crisis: club managers, bartenders, talent bookers, DJs, toilet attendants, bouncers, and janitors.

During their club quarantine tour, they encountered people who are not only struggling to keep their jobs, but also fear losing the place they call home. They met them in locations that were created for people, but which also leave an impact when completely empty. At first glance, HUSHis a book about clubs during the coronavirus crisis; at second glance, it’s also a book about what home can be.Staggat and Stein met enterprising, despondent, but also resilient individuals who willingly provided a glimpse not only into their personal situations, but also into their spaces. They descended into old breweries, entered power plants, locations under S-Bahn arches, parking garages, single-family homes, signal towers, backyards, cellar vaults, boats, and carriage houses. Lost places with a history. Spaces created primarily in the eastern part of Berlin after the fall of the Berlin Wall –during a time when party pioneers were transforming derelict industrial landscapes into venues for creativity and freedom. The result is a contemporary documentary work featuring high-quality photographs and accompanying interviews that offer exclusive insights into a unique subculture. HUSH keeps a record of what may no longer exist in such variety and diversity after the crisis.

Marie Staggat’s love of music and her hometown of Berlin is unmistakable. At the age of 21, she started working at the legendary club Tresor and photographed all of the famous national and international DJs; her photos grace the covers of numerous albums and magazines. In 2019, she participated in the “ELECTRO” exhibition at the Philharmonie de Paris, which has been on display at the Design Museum in London since 2020. She published her first book, 313ONELOVE, about Detroit’s electronic music scene, in 2016.

Journalist Timo Stein worked as an editor and reporter for the Swiss online news platform Watson from 2018 to 2020, penning exclusive reports from the AfD scene and conducting interviews with top politicians. Prior to that, he worked as an editor at the German political and cultural magazine Cicerofrom 2010 to 2016. His articles have also been published in the Austrian magazine Jüdisches Echo, Germany’sDer Tagesspiegeland Rhein-Zeitungdaily newspapers, the music magazine Spex, and on Germany’s SWR public broadcastingnetwork, among other media outlets. He also regularly appears as a political expert on Deutsche Welle, a German public state-owned international broadcaster.

Music and Merch from Paloma club